I love a good reflection, so here it goes. 37 was one of the best years of my life. I do not say that lightly as my mid-thirties have been a huge struggle for my health and personal life.

Around 34, I suffered from EBV and mono, while keeping up with running a business, and raising four small children. I had terrible insomnia, anxiety, and looking back I definitely was struggling with great sadness - possibly depression. All at once, two of my siblings and one of my best friends moved from Southern California to the Midwest. They were my rocks and it forced me to focus better on my marriage, that had all the sudden felt like it was falling apart. It put us in counseling and somehow by the grace of God, we came out of it all feeling much stronger.

Around the same time, in 2017, we took our first trip to Nashville. During our visit we both said, "We could live here." After my family moved back home and friends were moving away, I knew one thing was for sure: we had to move too. I couldn’t live the rest of my life being so far away from my family in Ohio. I also knew we weren’t going to move back to Ohio. So after this trip in late 2017, I prayed daily that God would make a way. During my daily meditations, I sat in middle Tennessee, with puffy clouds and green, lush rolling hills. I saw the church steeples coming up through the trees. I would envision what it was like to live there. I looked at real estate daily. I just knew God would make a way. 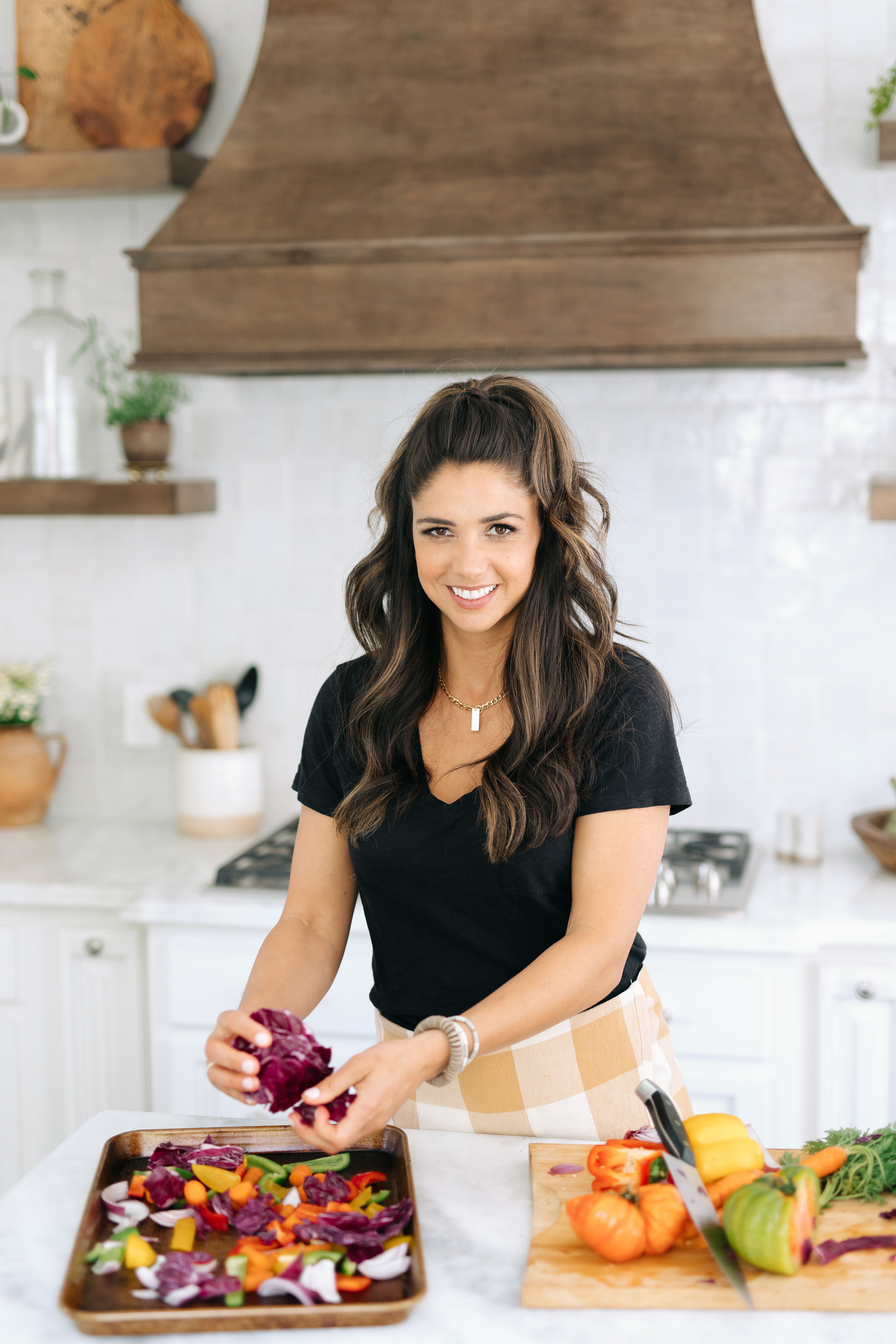 Fast forward to a world pandemic 2 and ½ years later... I was about to release my first book and the month prior to it's release, I was going on book tour with Carrie for Find Your Path. While we were in NYC, I remember watching the news at the Today show, while we waited to go live, and they had just announced the first Covid case in the city. At this point, I still didn’t think much of it. While we were flying home from this amazing adventure, we found out the world was possibly going to shut down. On a personal level, this meant that the rest of my trips with Carrie her and my own book tour were going to be affected. Canceled!! All of it! The biggest projects of my career…canceled! I couldn’t shake the feelings I had felt these last couple of years. There were many times I was up during the night, unable to sleep, asking God what HE needed me to pray for. I prayed fervently and felt like what was happening in the world was what God was using my prayers for. And I also couldn’t shake the last person I was with when the world was closing down was the one person who helped and encouraged our move - Carrie.

As the world shut down, one thing we realized quickly was that we were not staying in California. So we hunted for a lake house rental in Michigan that we could spend the Summer at, closer to all our family. We couldn’t find a rental, but the perfect little cottage came for sale and we jumped on it! We were set to close on it mid-June 2020 and we jumped on a plane with enough packed to last us a few months. First stop was to go to Ohio and hug all my family. We were in times that were so unknown to all of us and all I wanted was to be close to them. I was marveling over God working in our own lives, each step of the way. At the time, our girls were still enrolled in Catholic school in Dana Point, CA. We were watching closely whether school was going to reopen and what that would look like. In mid July, they announced CA reopening and school would also open. With a very weary heart, we started planning on going back to CA. I didn’t want to at all, but my husband hadn’t had the whole emotional and spiritual experience I had had yet. He’s very much the more quantitative one, I’m the emotional one. Four days after CA had announced it would open up, it shut back down indefinitely. Chris said, if we’re ever going to try out TN, now is the time.

We listed our house in CA, while still in Michigan, and searched for a rental in the Franklin area of TN. We were going to “try it out for a year.” It took four applications to find a rental and land in the neighborhood that we’re still in today. We flew back to CA, rented two moving trucks, said goodbye to all our friends and in nine short days of packing, we drove our sweet girls across the country. After a quick four weeks in Franklin, it was promising we were likely to stay. As we considered buying a home there, it became clear that God was planning to keep us in the community we were renting in. We had an amazing neighbor turned BFF let us know she had been praying for us for 10 months. God put us in each other's lives and we couldn't move.

I’ll save this whole story for another day, but I told her I could live in a house about a block away and the very next day it came on the market. This was only something God could orchestrate. We quickly put in an offer, along with four other families, but found out the owners had delivered their children in Mission Viejo hospital and that quickly catapulted us to the most favorable offer! We got the house! But it didn’t fall into place very easily and it was a very unsure and unsettling few months. We were finally able to purchase the home after about six months of already living in it, but it never felt like ours.

So we kept our options open and fast forward to Summer 2021, I had just turned 37, so here starts why this has been the best year ever. We were at our lake cottage in Michigan and a house came on the market in our neighborhood in TN that we decided we just had to see. Chris jumped on a plane to go back to see it. He did NOT like the house he came to see at all, BUT another house hit the market the same day. IT WAS ON THE WOODS and this was a family dream of ours. I wasn’t even sure I cared about the actual house, but the location was a game changer for me. He put in an offer as well as several other families and to this day I’m not sure how we were so blessed again, but we got the house! We listed our other house and began making plans to move AGAIN for the THIRD time in 12 months. Guys, we became masters of moving and we also hired amazing help, but moving is no joke, especially with four kiddos. But the girls were so excited, they were extra helpful because of it. They were even more happy because that meant we were staying in our neighborhood long-term.

In nine months in this amazing home of ours, I have my own office for the first time! This has been incredible for my creativity and creating a space separate from living for my work. My mind has never felt so healthy and I think this is a huge part of it. My children are thriving in every way: their health, their school, their sports, and their friends. They love their home and we are all loving the woods and magical world that brings to our lives. We have seen fox, deer and even a buck, bunnies, possums, armadillos, a mother and baby wild turkeys and so many cool birds including orioles, hawks and even eagles. We love our regular cardinal visitors as well! I always joke that I feel like Snow White and the animals just come to me. I could do without the snakes and massive spiders though!

We’ve been blessed with some of our favorite family and couple trips this year as well. You may have noticed via social media but we are loving exploring the southern states - especially Tennessee and Florida.

On a personal note, while I feel the wrath of the late thirties in my recovery time, in how much harder it is to build muscle, etc., I actually feel the best I’ve felt in my entire motherhood. Maybe it’s the sweet spot I’m in with their ages or maybe it’s because I’m so at peace and content for the first time in a long time. I will always cherish this 37th year of life that brought peace that I thought only existed in Heaven. It brought blessings beyond imagination. While I’m super focused on the blessings right now, I want to acknowledge that there were also some very emotional lows as well in losing friends, family and loved ones. It’s never easy saying goodbye. Yet the older I get, the more peace and understanding I feel about Heaven.

Thanks for reading this far! Lastly, I wanted to share with you all a couple more exciting things that happened in this last year, related to CCN and work:

I joined Fit52 as their nutrition consultant.

I helped produce an amazing masterclass for FitOn.

I created The CCN Balanced Kid - something I've always wanted to do - along with my favorite Dr. and friend, Kaisa Coppola.

AND.... I just signed my VERY FIRST SOLO book deal with Harper Horizon on a cookbook with a current working title of FEEL GOOD KITCHEN. Yes friends, it's happening!!!

So much more excitement to come to better serve you all - cheers to 38!